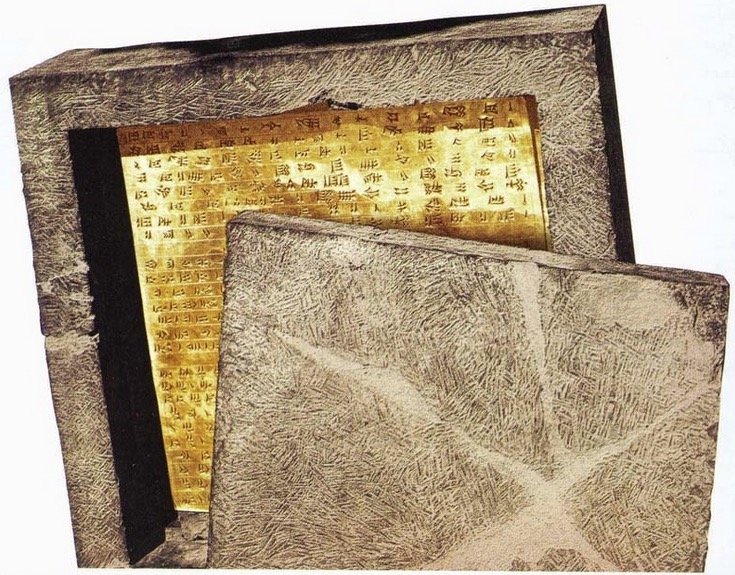 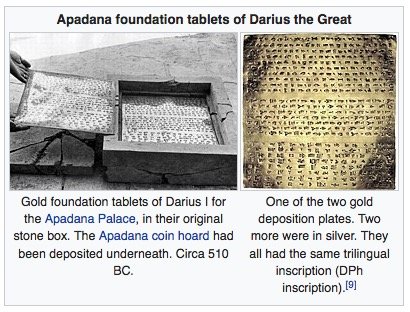 The Gold Plates of King Darius

Many Meridian readers will find the photograph above familiar. One like it was printed in the “blue” paperback editions of the Book of Mormon some years ago.1

The picture vividly made the point that keeping records on gold plates was not at all strange, as people in Joseph Smith’s day – and long afterwards – thought, but was a legitimate ancient practice.2

Today we know of dozens of examples where gold, silver, bronze and other metals have been used to preserve the important texts of ancient cultures, many of them stored in stone boxes.

The finely-inscribed gold and silver plates of King Darius remain an example par excellence of ancient record-keeping using metal plates. Buried for millennia, they were discovered by a German archaeologist in 1933. They remain one of the best examples of the plates that Joseph Smith reported locating and translating into the Book of Mormon a century earlier.

Where are the Darius plates today? Do we know more about them now, and do they still give credence to Joseph Smith’s account?

A brief history of the Darius plates

One of the world’s greatest archaeological treasures is Persepolis in south-eastern Persia, the modern Iran. Persepolis was the crowning highlight of Parsa, the capital city of the Persian kings of the Achaemenid dynasty. In the late 6th and early fifth centuries BC, King Darius 1st, “Darius the Great,” built much of Persepolis on a large rock terrace overlooking the city; after his death it was completed by his son and successor, Xerxes. A succession of kings then followed, ruling an enormous empire stretching to India, northern Africa and west to the Danube in Europe.

At the highest point on the terrace a huge “Audience Palace,” the Apadana, was built to receive visiting leaders. Its massive roof was supported by 72 stone columns of which only 14 still stand. Over each of the Apadana’s four corners rose a 4-story tall tower and in the foundation of each Darius placed a stone box, each containing a “foundation inscription” inscribed on gold and silver plates.

Each plate is tri-lingual, ie. the inscription was repeated in cuneiform script in 3 languages, Babylonian, Elamite and Old Persian. The short text essentially describes the extent of Darius’s kingdom and asks for the gods to protect him.

However, the invasion by Alexander of Macedon (Alexander “the Great”) in 330 BC brought an end to the largely tolerant and progressive Persian empire. The capital, Parsa, was destroyed and Persepolis was plundered of its treasures and then burned. At some point, then or later, two of the stone boxes were discovered and looted of their contents. But, as kingdoms swirled around them and earthquakes toppled more of the structure, the other two remained hidden and untouched for two millennia longer.

Dating the plates of Darius

One spectacular example of ancient record-keeping on gold plates is, the Darius plates are not identical in all respects to the Book of Mormon plates. To begin with, they were inscribed on only one side, whereas the Book of Mormon plates were engraved on both. As a single text, rather than a collection of writings, they were also not bound together by rings of any kind. The Book of Mormon plates were bound by D-shaped metal rings that had the appearance of being made of the same metal. Since then, other ancient “books” consisting of metal plates bound by D-shaped rings have been found. The D shape allows greater storage space than circular or oval rings do, a fact not appreciated in Joseph Smith‘s day.

The Darius plates are square, measuring 13 inches by 13 inches (33 x 33 cm) and .63 inches (1.6 cm) thick. In contrast, the Book of Mormon plates, as reported by witnesses who saw and handled them, describe them as rectangular and somewhat smaller at about 6 inches by 8 inches in size.

Why duplicate gold and silver plates? Clearly, Darius wanted to ensure that their message survived into the future, so duplication using four locations and two different metals were ways to do this. It is interesting to note that when they were discovered, the gold plates had survived in better condition than the silver plates. While the silver plates were a black color and almost unrecognizable when found, the gold plates shone as if brand new. In other words, gold proved to be a superior medium to silver for preserving a text.3

The superiority of gold for long-term record-keeping was something that Nephi undoubtedly already knew. Although the “Introduction” and the “Testimony of the Prophet Joseph Smith” printed in the modern-day Book of Mormon refers simply to “gold,” some eyewitnesses, including the Eight Witnesses, used more cautious language, describing the plates as having the “appearance of gold.” Significantly, Nephi, who mentions finding gold, silver and copper ore in the New World (1 Nephi 18:25-19:1), only specifies using “ore” to make his plates. For a variety of reasons including increased durability, most students of the Book of Mormon now assume that a gold and copper alloy was used.4

Of course, there are similarities between both sets of plates. Firstly, their age is almost the same; the plates of Darius were inscribed around 513 BC, while Nephi tells us that he located ore and manufactured his metal plates only after arriving in the New World, or perhaps around 580 BC.

Joseph Smith described the plates that he recovered on the hill near his home as being in a stone box, covered by a circular stone that was rounded on the top. Thus, it is particularly interesting that the stone boxes at Persepolis were found covered by a flat, circular, stone covering. This circular covering can clearly be seen in several of the photographs taken of the recovery of the Darius plates, (see links in notes 2 and 7 below)  but – understandably – the focus of attention was the gleaming metal plates themselves. It remains unclear what happened to the round coverings; they clearly held little interest to the excavating team and may not have survived a period where some excavations are described as “hasty” and less-than-ideal storage conditions.

After their discovery, one set of plates was stored at the palace of Reza, Shah (King) of Iran and the other set went on display in a museum. After the revolution in 1978 removed the Shah, son of Reza Shah, the modern Islamic Republic was established, the second set was also displayed in a museum. For many years both sets of plates and their stone boxes were displayed in Iran’s National Museum in Tehran. However, they were still not immune from theft and several years ago, after one of the gold plates was stolen and melted down by an official, they were removed to the government’s National Treasury.

Apparently, the stone boxes are also now held in the same location, but despite persistent queries the level of security surrounding these national treasures is such that all that is certain is that the plates are no longer on display. There the 3 surviving plates (2 silver and 1 gold), finally secure after their long journey down through time.

Surely a literal realization of the ancient prophecy that Truth would come forth “out of the earth” (Psalms 85:11), the plates of King Darius have thus fulfilled their role in the Restoration by showing us that Joseph Smith and the other witnesses of the Book of Mormon plates accurately reported what they had seen and handled.

4. Ali Mousavi, Persepolis: Discovery and Afterlife of a World Wonder (Boston/Berlin: deGruyter, 2012) is perhaps the most complete scholarly source on the subject. It contains images of the recovery of the Darius plates (see Figs 8.10 – 8.19) and notes the circumstances and intrigues that led to “lack of precision and haste” in excavations shortly before the plate discovery (p. 170). It can be accessed online at: https://archive.org/details/persepolis_discovery_and_afterlife_of_a_world_wonder 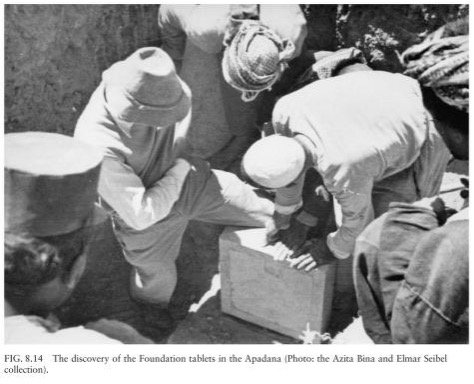 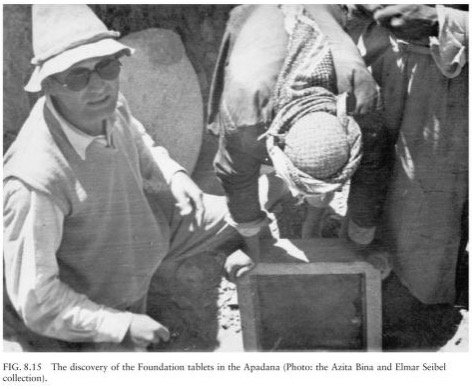 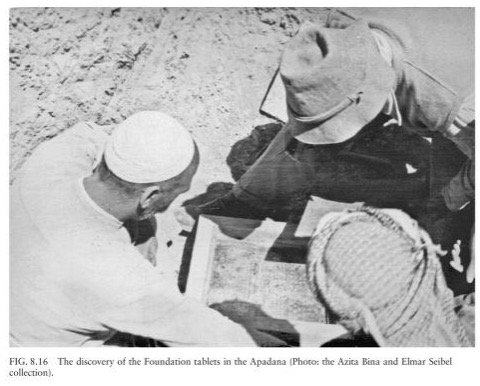 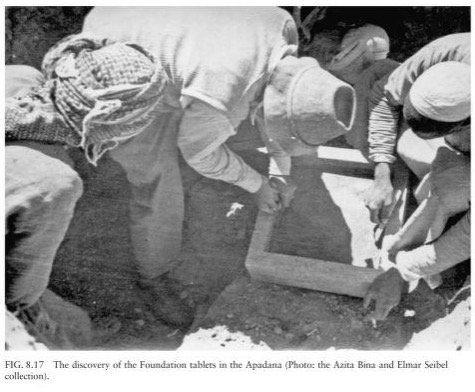 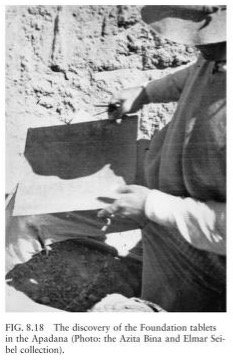 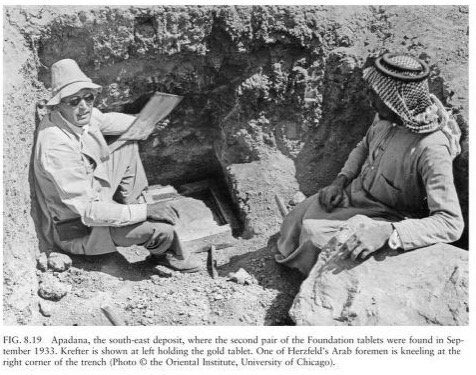 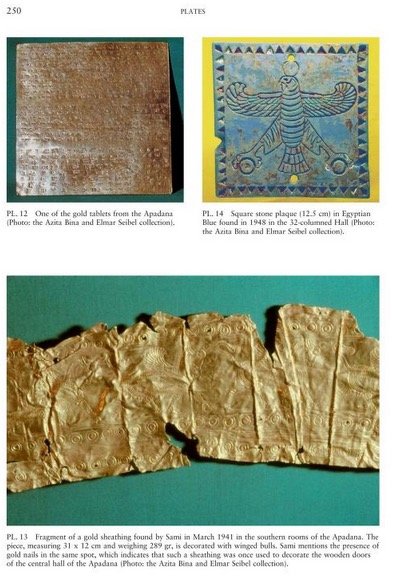 To return to the MAIN PAGE, click on the return button